​Today you will find Temple Ohav Shalom residing in its own building located in the Allison Park suburb of Pittsburgh, Pennsylvania. But it did not start that way.

Early in 1968 a small group of Jewish families living in Pittsburgh’s North Hills met and agreed to canvas the neighboring communities to determine if there were enough families living in the area to begin a religious organization. Through their efforts, other Jewish families were located and the North Hills Jewish Community Center (NHJCC) was formed. The founders hoped that establishment of the NHJCC would help foster growth of a Jewish community in an area rapidly making the transition from a rural to a suburban locale.
Major objectives of the NHJCC included:
​It is said that the membership committee would go through the telephone directory looking for Jewish names. They would call, ask if that family was Jewish and, if they were, invite them to join.

During the first year, using homes of members and rented facilities, Friday evening services were held monthly, holiday services were conducted, a religious school started and a number of social events held all utilizing the services of volunteer congregation members.
A number of major steps forward were taken during the 1969-1970 period. Friday night services were held on a regular basis twice a month and all holidays and festivals were celebrated. By holding services in private homes and having members prepare and participate in the services, a feeling of involvement developed.

In order to serve as many families as possible during its growth years, the NHJCC decided to adopt a unique religious program. This can best be explained as being neither Orthodox nor Conservative nor Reform, but an attempt by the members of NHJCC to develop their own meaningful definition of what 20th century Judaism meant to them. They considered themselves a “Reconservadox” community.
The religious school was expanded and Hebrew classes were added. Incorporation as a legal entity and active participation in community activities were two additional steps that were taken. Plans were also made to expand the services offered during the 1970-1971 year so that a full program of Jewish activity would be available.

By 1971 growth had the Temple looking for rented facilities. To meet the growing religious and educational requirements, arrangements were completed for the hiring of a part time rabbi to professionally guide the Center’s programs. The Temple’s first such rabbi was student Rabbi Richard Address and there were a number of others that followed him. For the next 10 years the Temple utilized a variety of places – from Northway Mall community room to Vincentian High School to Sheraton Inn and Passavant Hospital’s chapel. In 1975 services were held in a Methodist Church, Hebrew School in a Baptist church and Sunday School in a Catholic school. A portable ark was used to carry the Torah from place to place.

In 1979, a 10-year dream was made possible when a building was purchased. The first Shabbat services were held on Dec. 12, 1979. On March 16, 1980, the building was dedicated. The Temple’s name was changed to Temple Ohav Shalom in 1981. After much discussion about where to affiliate, Temple Ohav Shalom became a member of the Union of American Hebrew Congregations on May 23, 1982. The Temple continued to use part time and student rabbis on a twice a month basis until 1982, when our first full time rabbi was hired. In 1997, Rabbi Art Donsky became the rabbi at Temple Ohav Shalom where he remained as the congregation’s spiritual leader until retiring in 2013. 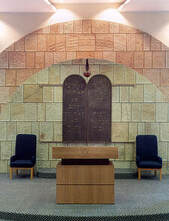 By 1997, the membership had outgrown the space in our building. One member had a vision and started a process. The first step was to raise funds. Led by several of the Temple’s members, and with strong support from Rabbi Donsky, we started a large capital campaign. With strong support from the membership, the necessary goal was achieved to permit the construction/purchase of a larger facility. After a protracted search for such a suitable building or place to build the new facility, the Temple purchased a defunct racquet ball club, hired an architect and converted it into the building we have today. On a cold snowy Sunday, January 3, 1999, Temple Ohav Shalom moved into its new building.
​
In the sanctuary, the ark was carved by Temple member Michael Kraus, a nationally known sculptor, with the last stone carved with the assistance of the Sunday School students. Michael also created the bronze doors which are inspired by an 18th century synagogue in Suchowala, Poland. The stained glass windows, hand crafted by a stained glass artist, tell the story of the four seasons. 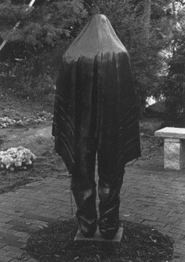 With a new building and the property it sits on, the Temple was able to create a Holocaust Garden. A congregant family challenged Michael to create a sculpture for the garden. After one design had been rejected, Michael produced the powerful sculpture that stands in the garden today.

Over the years, the Temple has expanded the offerings for spiritual enrichment. A monthly Tot Shabbat service is offered, which is a dinner and short service for very young children and their families. The first Friday of each month is a Family Service geared toward older children (K-6th grade) and uses a separate prayer book. During high holidays, similar services are offered to engage all members.

In 2006, a second capital campaign was successfully undertaken which allowed the Temple to pay off its non-mortgage debt, make improvements to the building and create an endowment fund.

The Temple established a Jewish cemetery known as Temple Ohav Shalom Memorial Garden. The cemetery is available to Jews and their Jewish or non-Jewish spouse/partner and their children.

The Temple has a women’s organization originally known as Sisterhood and today identified as Women of Ohav Shalom. Its history stretches to the beginnings of the Temple. Women of Ohav Shalom’s mission is to bring together the women of Temple Ohav Shalom to serve our Temple, support our community and enrich our lives through personal growth and friendship. They accomplish this mission through social and educational programs, fundraising, community service and involvement with Women of Reform Judaism. Their activities, enhanced by the richness of their diversity, further our commitment to Jewish ideals, education, spirituality, social action and leadership development.

WOS has organized receptions and dinners to celebrate Jewish holidays including a Chanukah dinner, Seder and Break-the-Fast. Their fundraising projects help support the Religious school and Pre-school along with additional temple needs. They are members in good standing with Women of Reform Judaism and participate in their activities and goals. WOS helps maintain and staff the Judaica Shop, which features Judaica items as well as other gifts and accessories. WOS also provides keepsake gifts to honor our B’nai Mitzvot.

The Temple also has a men’s organization with origins in the early days of the Temple. Originally known as the Men’s Club, it is in the process of changing its name to the Temple Ohav Shalom Brotherhood and adopting a mission statement. It provides an avenue for congregant members to bond and solidify their Jewish community and faith. Among its other activities, it raises funds through a Super Bowl fundraiser, performs much of the grunt work behind the scenes, such as construction and take down of the Sukkah, Purim Carnival, and all other miscellaneous activities, provides parking lot management for all special events, including the High Holidays, and volunteers to support all other fundraisers.

The Temple has historically had a core of outreach activities that it has led/participated in/supported. Those include bi-annual blood drives at the Temple in conjunction with the Greater Pittsburgh Blood Bank; a high-holiday food drive to benefit North Hills Community Outreach; and our annual Mitzvah Days (traditionally held on MLK weekend) that benefited 8-12 organizations in the local, regional, national and international community. This latter activity was a Temple wide effort and was undertaken in conjunction with the Lifelong Learning Committee and the support of the Men’s Club.

In addition to the core activities, the Temple has had numerous other efforts over the years that have been led by various members with an interest. For example, in the past, we were members of PIIN, Pittsburgh Interfaith Impact network. We are in the process of identifying a new member to represent us for that group due to the illness of the current member. Also, we have run a school supply drive and a coat drive (in the appropriate season) for the benefit of North Hills Community Outreach. This effort has been led by the teachers in the religious school over the past few years.

Our youth groups are also involved in the community. The two biggest events that they participate in each year are through J-Serve and include a well-attended Pittsburgh-based community event coinciding with International Day of Jewish Youth Community service, and the NFTY Pittsburgh Mini Social Action Weekend – Shabbaton, which involves a community service weekend with other NFTY Pittsburgh teens. Throughout the year our youth also participate in Temple wide events, such as Mitzvah Day and volunteer their time at Night at the Races. Our older students also are involved in J-Line, a weekly Sunday program in at the JCC geared towards teens of all denominations.
Temple Ohav Shalom remains the only Reform congregation in Pittsburgh’s Northern Suburbs (often called the “North Hills”). It also has one of the largest religious schools in the Greater Pittsburgh region for its size. This is an exciting time to be a part of our vital Reform congregation.

The Rabbinical Sages tell us that a Temple has four names, one for each of the roles that it serves:

This IS Temple Ohav Shalom.